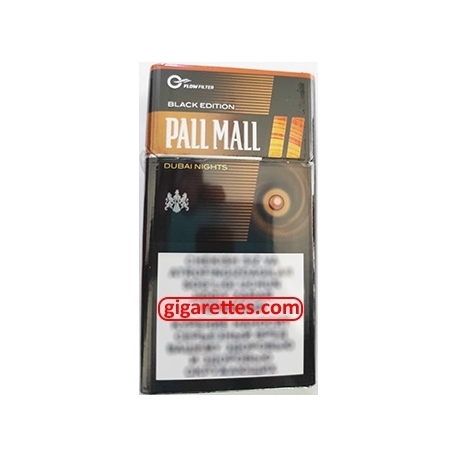 (With 20 filter cigarettes in each pack)

In 1907, the Pall Mall brand was purchased by American Tobacco. It was on these cigarettes that the new owners tested all the innovations in design and production technology, namely: the king-size size (currently the standard size for cigarettes is 85 mm), a new method of clogging tobacco that makes Smoking cigarettes easier and more enjoyable.

Pall Mall reached its highest point of popularity in 1960 when the brand became the number one brand in the United States. The risk of experimenting with the design was justified. Pall Mall released new long cigarettes (100 mm), thus creating a new standard in the production of cigarettes. The Pall Mall brand was at the peak of popularity until 1966 when the Winston brand was launched on the market with the famous advertising campaign "Winston tastes good like a cigarette should".

Pall Mall later became the property of Brown & Williamson Tobacco Corporation. By that time, Pall Mall cigarettes were far behind their competitors, as they were still unfiltered cigarettes. Only in 1987 were cigarettes equipped with a filter and released to the market. Currently, Pall Mall is one of the most famous international brands of British American tobacco, which is sold in 60 countries around the world.

Pall Mall, its memorable Art Nouveau lettering-all this has become an integral part of the design of cigarette packaging. The pack shows the coat of arms with two Royal lions resting on a shield with the motto "Per Aspera ad Astra" (through the thorns to the stars). The same motto can be seen on the state seal of Kansas. Just below the shield is a banner with another Latin motto - "in hoc signo vinces" (under this banner you will win). P Pall Mall, which appears on the packaging – "where certain people gather". The design of cigarette packaging has undergone many changes over the years of the brand's development, but it has always remained easily recognizable.

Pall Mall Dubai Nights is a modern capsule line. Cigarette contains a capsule with an orange taste. Very interesting flavor with a mild fresh taste. Compact 'queen' size is the most popular format nowadays. The same length as king-size, the only difference is in cigarette diameter which equals 6.6 mm versus 8 mm for a regular king size.

9 other products in the same category: